Gearing up for the McCloud River

Just an update for the fly-fishing-minded.  Season opens here on Saturday, and I have managed to protractedly throw off the yoke of soul-sucking bond at work for a couple days commensurate with that time.  I’m sure some other vampiristic, logistical Van Helsing will pop out of the ether and mess it up.  But until then, I proceed as if I will make it to the river unimpeded.

One of the things I’ve ben doing is trying to repair my line–one that I’ve made out of horse hair.  Yes, that’s right.  The castbility, grace, and even-keel energy transfer from a line anachronistically yanked out of the 15th century works better for me than some microcosmically-balanced monofilament or fluorocarbon with whatever permutations those might have.

The problem is, those Stallion hairs break, and get a little weird.  And once a section starts going south, it’s time to take that line out to the ‘little place where fishing lines go to heaven” and put it to sleep.

Oh, and my daughter’s wholesale obsession with a tousled, snarky, bowtie-wearing time traveler cruising through time and space in a British phone booth brought about this idea from her–the TARDIS, Tenkara kebari fly: 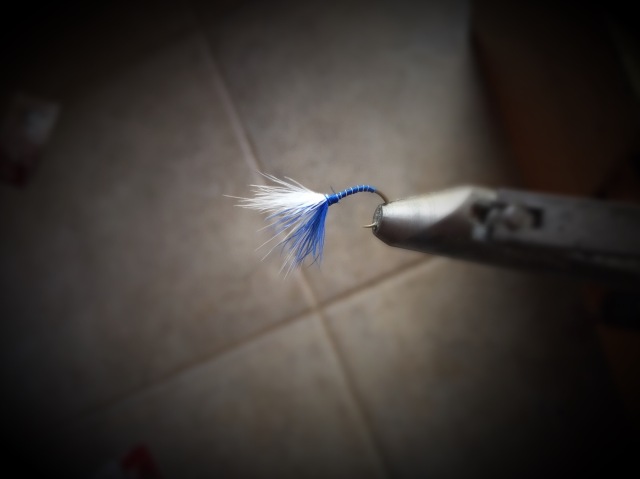 Doctor Who caught that fish!

Since I am in a mad rush to make sure I have enough flies tied before I hit the river, one can click on the picture and pick it apart by critical nuance, if they want.  I can tie complex patterns, but quite frankly, doing so any more requires me to wear glasses, and have the attention span of a rat terrier when doing so.  This fly is borne of an atrocious, lazy underpinning–and apparently a desire to pander to the reflexive fandom turns of a fifteen-year-old daughter.

By the way, she was three and a half when she hoped me design the fly featured in this clip:

To those that DO tie, I want to explain that I have started to use strung marabou for the hackle.  I tie it in in reverse direction, and then fold it back and build a thread base behind it. The reason I am doing is this is because the color options are virtually limitless.  I cannot say the same for strung saddle hackle and such.  And the caribou tie-in can be made to any size.

That’s it for now.  I’ve got a few other things to pack.  Then, it’s just an hour drive,and couple of days to forget how much I hate thug life, and all that seek a degree in that cancerous pursuit.

This entry was posted in Fly Tying, Tenkara, Uncategorized and tagged Doctor Who, fly fishing, kebari, Tenkara. Bookmark the permalink.

1 Response to Gearing up for the McCloud River