I managed to waft back into my own, local Barnes & Noble, just to see just how anemic my choices are.  And for the most part, I was right.  They had not a single title I was looking for, even though not a single thing I was asking about was in any way, obscure. At least they have my own personal biases covered nicely:

They also have a rather huge selection of bibles.  This  also echoes my first request, The CS Lewis Bible.  It’s the NSRV, which, I don’t know very well, but will at least keep me from having to read the word Peradventure to my kids. I don’t mind big words, but the big words I use are still used today. I know it’s a petty quibble.  Go ahead. Smite me.

Of course, I figure if Barnes & Noble is going to come close to going to the apologetics Superbowl for Christian thinkers in the theological section, I may as well expect someone in the B&N braintrust to sit back with the playbook and figure out how to get Kaepernick out there in the fourth quarter and throw a Hail Mary pass. Go long:

My guess is, this is all in the spirit of fairness, equanimity, and the fact that I’m sure tons of people walk in there every day and say “Hey, I’m starting a Coven. Can you point me in the appropriate direction for resources that might help me conjure Belial from the third cardinal point?”

And to top it off–they had two of them.  In case you want to support a losing horse that breaks down as soon as the gate drops.

I am going to blame Satan for Barnes & Noble acting like any of Stant Litore’s books are the equivalent of the early days of Mr. Snuffalupagus on Sesame Street: people have heard of him, but no one can prove any sentient evidence that supports said existence. 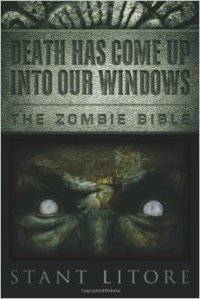 “Whats the deal?” I ask. “The man that wrote the Zombie Bible series can’t get a leg up in here.”

Neither could they tell me directly why I can’t buy Litore’s’ books on my Nook–bit I CAN on a Kindle.  I don’t want to do that because my Kindle is really my iPad, the backlit, LED thing makes me all nervous and prone to rash behavior, like flying gyrocopters to the Captiol Building in DC.

Now I’m in troll mode.  I point to a really huge display over 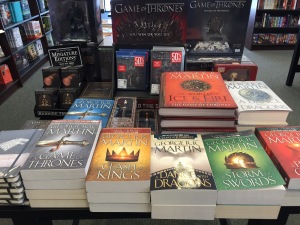 to the right, and say “what’s all this?”

“You mean the Game of Thrones series?” they ask.

“I’ve never played it.  Those rules must be hard to memorize,” I said.

They just looked at me like I was crazy.

“Never heard of him,” I said. “Why can’t you cut that display in half and get Stant Litore in here?”

I think something about me saying I had never heard of Game of Thrones in general made them think I was a loon.  But when I asked him to check the availability of Studying Cirrus Clouds for Fun and Profit, he knew the game was on. I then found this:

The Disney motif caught my eye.  I wanted to read it, but the binding was so unwieldy that I had to stand on it to hold it open. Which is okay, but I’m now wearing Power 1x reading glasses.  Those won’t help. In order read it that far away, I need glasses that can accidentally give me a glimpse of Alpha Centauri when I wear them. Then, I’m about ready to walk out, when I see this:

I didn’t even read it.  I just let the inspirational potential waft from the inside of it–just looking at it.  Bigfoot’s coming to Redding.  Soon. I can feel it. My birthday is Saturday.  Ape suits, Bibles, fly-fishing, ukuleles. Hmmm . . . .I just don’t know.

8 Responses to Trolling around Barnes & Noble