How in THE WORLD am I supposed to write in Starbucks, when the monk behind me is using an iPad?

I have this swirling, pessimistic algorithm I use.  It’s called the “bail of hay” theory.  In summation:

It’s sort of like Murphy’s Law, but it’s one I tend to internalize more.

Such is the case with now.  Whatever kind of seething, nether-wraith from the ninth pit decided it would be most swell to hit me with this OCD–invoking anachronism knows good and well what it’s doing: 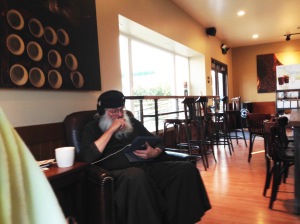 Sure sure.  I’m aware that not every sequestered man of the cloth has lept of the white cliffs of Benedictine poverty, but c’mon.  An iPad?  I can’t write now.  St. Augustine’s probably scouting Limewire for “sweet flows.”  I simply do not have the compartmentalist talent to ply my trade with such conflicting worlds.

And besides. He’s probably reading my blog.

This entry was posted in Reading, Uncategorized, Writing and tagged Blogging Advice, Self publishing, writing. Bookmark the permalink.

7 Responses to How in THE WORLD am I supposed to write in Starbucks, when the monk behind me is using an iPad?

Do life with me
TENKARA ANGLER

this is where I ramble - new post every Monday. Or whenever it happens.

Ordinary Adventures
Head In The Clouds, Heart In The Books

Dreaming And Reading Through Life