In which I borrow from my own, 2006 Book Review of David Shenk’s “The Immortal Game” 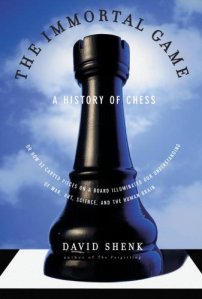 Note:  Apparently this review (which in and of itself is FOURTEEN years old)–has been sitting as a draft in my blog-post hopper.  I have a tendency to think my Amazon reviews are wasted if all they do is languish there like a marooned critic.  So here it is.

It seems like some of the greatest works about a subject emanate from those who’ve made a laborious research of that subject as a relative outsider, as opposed to those who are inexorably saturated in the subject they cover.

Such is the case with The Immortal Game. If David Shenk isn’t considered a chess missionary by the end of this book’s run, then chess as a whole will be the one to lose. Far from being another static test pattern of information, Mr. Shenk very deftly walks the line between burgeoning chess expert and enthusiastic historian.

While the predicatory backdrop for the book is the infamous 1851 match in London between two chess rivals, Adolf Anderssen and Lionel Kieseritzky, the book as a whole serves as a sort of societal snapshot, and how chess has influenced even some of the world’s most weighty decisions. Chess’ innate characteristic of distilling the abstract and insoluble into digestible and concrete realities makes routine appearances throughout history, and the author skillfully makes use of these examples throughout the entire work.

Shenk also explores chess paradoxical side, examining how a game that has driven some of the world’s great players into institutional madness has also functioned as an anchor of sanity for those less inclined to peer directly into the abyss of infinite values; just exactly how was it that chess was a vital diplomatic tool in the hands of Benjamin Franklin, and yet a diplomatic nightmare in the hands of Bobby Fisher?

What I love about this book is the way Mr. Shenk immediately levels the playing field with the reader, by placing himself solely in the camp of one as easily flummoxed by “mate in two” conundrums as the next guy. Impeccably researched and peppered with quotes from the famous as well as infamous, the book sort of creates its own inertia by making the reader wonder what’s around the corner.

By approaching the historical aspects of chess overall, as well the annotations from June 1851, one feels a legitimate sense of journey from someone intellectually curious enough to read a book just like the one they’ve written. The book is a smart read, but not the pretentious work of a chess diva. This is a book that says “here’s what I’ve learned thus far . . .” setting the reader up for either a sequel, or their own journey through the annals of chess history. This is a book that will engage a grandmaster, while driving the novice to learn more about the game. The historical tapestries are far reaching, and rich, yet one never feel the sense of impending, academic overload so many historical texts are guilty of delivering.

I do not intend to downplay the importance of the game after which the book is titled. The game, along with its very insightful annotations, is cleverly woven through the book as a sort of musical coda, before engaging the next movement. The game’s comparatively short 23-move lifespan can be interpreted in many contextual ways. It can be seen as a testament to hope, or a paean to tactical brilliance. One can see the fateful pessimism of Napoleon’s waterloo, or the epic and bloody triumph at Normandy. It can literally be transmogrified and recontextualized an infinite number of ways, and yet never violating the boundaries of plausibility. Yet, Shenk proves the game itself is worthy of study in an academic sense as well. Shenk’s annotations are clear and brief, leaving the readers to discover their own rationale for moves considered simultaneously brilliant and suicidal. I had never studied a game quite so closely, and never really thought a chess game could carry any real pyrotechnic qualities. I was wrong.

For this analysis alone the book is worth its price many times over.