Ghosts in the machine, ghosts of a chance, and starting a novel 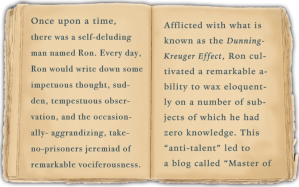 So the initial starting point for the novel I’ve had in my head for years is finally begging to come out.  It’s got historical merit.  It’s got comedic offshoots.  It’s got out-and-out absurdity.

So I’ll just say this much.  The novel involves somewhat of an existential crisis.  Not for me, but for the antagonist/protagonist/whatever-it-is-he-is sort of character. The problem is, since the character is technically one that, if presented outside the realms of the farce in which I intend to present him, would not be exactly a sympathetic character.  But I’m learning that it is possible to make a reader care about a character that you don’t necessarily have to like.  Except in this case, he will be likable, because he’s sort of the retarded antithesis of what he would be if I weren’t messing with the calculus.

My main problem here is, how do I take a subject rife with legend, superstition, ethereal conversations, sweaty moments of duress, and anguish and maraud it in a way that’s funny?

I used to write political satire, and I learned one thing: If you’re going to replicate newsprint, and the cadences of reporting, you better at least understand the nature of news reporting.  I began to actually become more engaged in the news, because I knew I was going to satirize it.  It later became my rule of thumb: If you can summarize it, you can most likely satirize it.

Notice I did not say it required me to be as smart as a journalist.  I later learned that the garden-variety journalist is an empty-headed, idealistic, groveling echo-chamber for other-people’s reporting.  Once I started actually trying to locate what is called “primary source” material for the majority of the stories, I found they were limply linked to a ridiculous peer-circle with the informational life of the Dead Sea.

But anyway.  My book is something I take more seriously than I did flaming out two-dimensional Molotov cocktails at political correctness and the disastrously-incestuous nature of the Washington Press Corps.  I’m actually going to have to understand the historical trajectory of my subject completely, so I can form a cohesive destruction of it.

The other issue was this:  Once I start with the blatant one-offs, also-rans, and radioactive isotopes in messing with the historical record, comes this little conundrum:  HOW IN THE WORLD DO I CLEAN UP THE MESS AFTER I’VE DELIBERATELY MADE IT?

This is exactly why the book idea, which popped into my head in 2007, has stalled out with nowhere to go; I, no matter how creative I might think I am, had not the ability to figure out how to do this without bringing in the magical “Ghost in the machine” fix—otherwise known as the deus ex machina—a cheap literary tactic that takes an unsolvable situation and fixes it for the sake of solving it—example:  I manage to write a novel with forty-three plot twists,  twenty-six clever footing-changes and a ton of little dynamic  alterations.  Somehow, I manage to paint a character into some situational corner—such as making him or her poor, and living on the streets, but now I’ve gotten to the end of my book, and I forgot to rescue them from their dilemma.  So instead of a laborious rewrite, I simply have a bag of money roll out of a Brink’s truck on the way to the vault, and land at their feet.

My fear of making that kind of a mistake has been one of my hindrances.  So the other day, my fifteen-year old daughter, Emma, says to me, “Dad, what you ought to do is have your alternate history become the explanation for the way things have actually turned out.”

I have no idea why I never thought of that.  Then it occurred to me. In a sense, I am using a ghost in the machine—but I’m doing it in the beginning of the entire farce. Apparently, my kid can see it.

And apparently I can’t.  Or at least it seems as if she’s playing the Haley Joel Osment to my Bruce Willis for now.

1 Response to Ghosts in the machine, ghosts of a chance, and starting a novel