Robin Williams: The eyes had it. 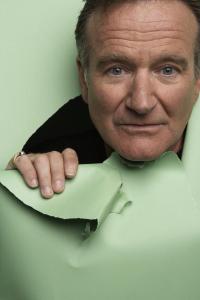 There was always something about Robin Williams–something intangibly lurking behind the eyes that betrayed a sadness in direct disproportion to the joys he conjured in others. His face would smile, but his eyes–the EYES. They were different. They told of something other . . .

I’m of the belief that Williams’ stream-of-consciousness virtuosity was a component of his internal makeup; his hard drive was bigger and faster than the average. His software was constantly updating in direct disproportion to the world around him. He was, in effect, a MacBook Pro in a Commodore 64 world.

I believe his prescient gifts allowed his stupefying,  light-speed cognitions to see the world’s trajectory–its future–it’s nihilistic yearnings. And yet he couldn’t possibly convey it. He could see over the dashboard.

I also believe that same software was in no way equipped to handle the data. Something was missing; the eternal patch never made it to the download folder.

And so it crashed. Blue screen forever . . .

And I for one am saddened.

2 Responses to Robin Williams: The eyes had it.