Wow, am I easily derailed 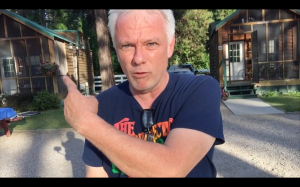 It seems only like yesterday, I was pontificating, ruminating, cogitating, deliberating and prevaricating about wanting to write my book–complete with the breathless declaration that I had completed the first chapter.

Then, I went to McCloud on a church.family camp thingamabob.  I managed to get derailed again, when the ambient temapterature reached about 225 degrees.

Okay, maybe that’s a bit high, but needless to say, the temps put the trout into some other Narnian state of existence, because they were virtually nowhere to be found.

So instead, I started loitering around  the town of McCloud, talking to people and asking “which way to the mountain?” even though it’s visible from nearly every porch.

Then, I decided to video blog a bunch of nonsense.  It was fun.

Then, a bunch of other odd, Providential stuff happened, and I’ve been off on a cloud about that.

These under-insulated smart alecks are DARING me to climb to the top!

At the end of the trip we went to the Sisson museum, and looked around.  This is where I saw a bunch of pictures of people standing on top of Mount Shasta.  It was right then and there I decided.  I can’t stand the fact that I live RIGHT NEAR a 14,000 foot-elevation mountaintop, and I haven’t been up there.

Yeah yeah. people die. I get it. Meh.  Only 60 deaths are recorded there. Yosemite has well over a thousand.  So apples and oranges.

And besides. I’ll be with a friend in case the dark specter of cannibalism raises its ugly head.

Too mysterious a legacy to not be messed with!

What does this have to do with my book?  Nothing.  I was nearly ready to find some ridiculous rationale for delay when my  August, 2015 edition of Acoustic Guitar magazine came in.

Call it an omen. A sign.  A harbinger.  Whatever.  I’m supposed to be circumventing–and then ultimately recusing this man’s legacy through the bald assault of my fictional molotov cocktails.

1 Response to Wow, am I easily derailed