Concerning the reverse-psychology of homeliness 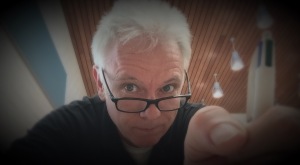 A few years ago, I started messing around with buying dime-store reading glasses.  I did this mainly because my eyes would intermittently have moments of focal-challenges.  But 95 % of the time, I didn’t really need them.

A few years later, and I’ve gone from “keeping a pair on hand” to “keeping a pair tucked away at every possible junction in my life.”  Still—only needing cheapo glasses, as the odd ebbs and flows of my ocular degradations are relatively minor.

But I am now to a point where, I could technically read a magazine with standard font without them (currently, I use a base-level 1.00x power set.), and get by, but I notice a sort of instant fatigue that sets in, that is immediately alleviated by using them.  So to them I now go without reservation.  But the adjustment period took a while—mainly because when you haven’t been seen, associated, or cast in anyone’s mindset as the avatar for corrective lenses, you have the sudden rhetorical rush of people that HAVE TO WEIGH IN about the way they do—or do not—fit your face.

Primarily, people feel the need to reassure me that I “look good in glasses.”  This is of course, preposterous, but I understand the need for the “fulfillment of social contracts,” “general human diplomacy,” and another term far removed from the lexicon of human interaction when referring to the appearance of others to their faces: Lies.

Like me, If you’ve started about with a base currency of ugly, no micrometers, T-squares, calibrations, tweaks, adjustments or articulated, watchmaker-level attention to detail on the frames of a set of spectacles is going to reverse that.

This is why I’ve decided to deliberately buy the worst-possible-looking glasses on the planet, and wear them.  Because I understand the nature of compensatory cognition—a term I just now made up, but I will explain nonetheless.  I don’t care what you call it, but I know it exists.

In the same fashion an on-deck batter swings two bats before taking to home base, wearing the most preposterously-horrid set of magnifiers will hopefully impute a false-sense of George Clooney to my visage when I remove them; the reference point is skewed, and thus are my handsomeness ratios.

If I can find a set of bilateral monocles that literally cry out “birth-control,” I will in retrograde be the beneficiary of an aesthetic VAT tax on Brad Pitt’s marketability in any more film adaptations of Homer’s works..  This will fade quickly, just like that little spiral illusion you stare at on Facebook—the one that causes the wall next to you to appear to be gesticulating.

I don’t really mind the idea that I have issued a decree of relativist reduction of the wholesale ruggedness of Orlando Bloom, simply because I’ve decided that the leopard-print set of teardrop readers hanging in the discount aisle will make me look like a genetically-modified Simon Chipmunk while I try to read Flannery O’Connor on my Nook.

This, of course, begs questions.

1)      But what about the ability to make the font bigger on your Nook?

Yeah . . . no.  As I said, the initial issue with glasses is, everyone feels the need to opine about them. So for now, I’m going use my fellow man’s inability to accurately reference anything to launch an indirect, confiscatory assault on Liam Hemsworth’s flawless facial landscape—and transfer it into my aesthetic bank account.

2)      What about getting prescription glasses that can look exactly like you want them.

This has many problems.  The first of them being that I have something called a “dashboard.”  The second of them being ‘the need to make forcible, left-turns.” And the third is something known as “open passenger window.”

I’m not really going to pay an exorbitant amount of money for glasses that will contribute no greater good to my vision than the cheapos I buy in bulk.  I don’t need people to think I’m trying to alter their perceptive arcs. I need my Ugly Duckling Theorem to be secret—if it’s going to be successful.

No. No, and NO. Did Adam and Eve wear transparent fig leaves?  That’s what I thought.  And for the exact same reasons.

2 Responses to Concerning the reverse-psychology of homeliness