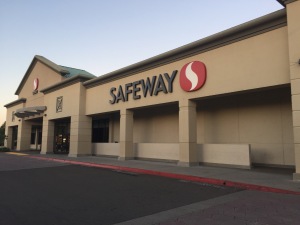 This is my local grocery store. It’s called Safeway. If you live near me, you know what it is. If not, it’s probably foreign to you. It doesn’t matter. They sell stuff, and I go and buy it. That’s all that matters for the sake of today’s lecture in Giesecke 101.

But they also sell things that people want, but, somehow, decide to not buy it. Yet, for some quirky reason–they make a deliberative effort to carry it out the front door, nonetheless.

Yes, that’s right. There is an entire population of people out there for whom getting tanked-up on Vodka is part of some hierarchical needs pyramid Abraham Maslow apparently designed when he was dropping mushrooms.

That said, lets get all Apocalypse Now on the general store, shall we?

This—Is a film composite I made to illustrate that my local grocery place is slowly turning into Sierra Leone. Or, depending on who you talk to–Rio De Janeiro. I shot the footage with an iPhone 5, and then made it look like a Blackhawk helicopter was performing some kind of drill. It looks real. It is not.

Sad thing is, we’re about two more gunshots and a stabbing away from the entire place being declared a War zone by Governor Brown. And I for one have a solution. It’s a one-part piece of internal, corporate legislation that would pass the House and Senate, if it was that kind of process. This pre-emptive bill comes only after many, many hours of deliberative contemplation, and attention to the local cultural morays, factoring in divergent economic strata–all the while not losing sight of the “human element.” And this policy is:

1) Lock up the booze

And here is the reason I say that:

Secondarily, I’m of the opinion that someone over there at the store has been fed some kind of malignant focus group data that says that restricted access to disposable razor cartridges is the only thing standing between civilized society and a Manchurian bloodletting. Because it nearly requires a TSA proctologic run-up for simply asking my grocer to “unlock my desire for a closer shave.” See this: 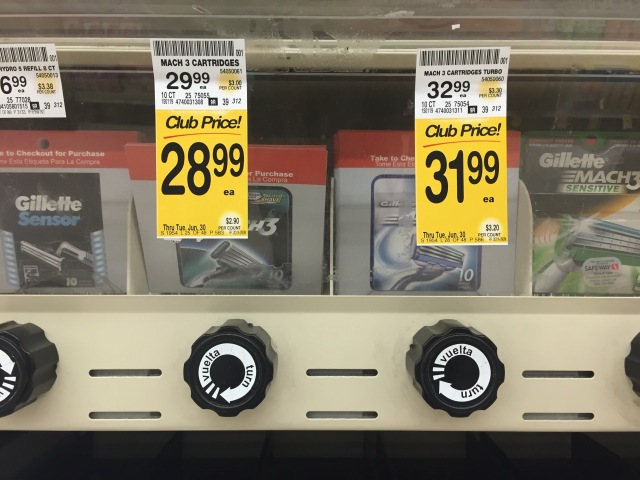 Those aren’t even the cartridges. Those are vouchers that drop out when I crank the little handle. I have to take them to the pharmacist and have him condescend to sell me the blades—right then and there. Meanwhile, Captain Jack Sparrow is cuddled up with the Chivas Regal, caterwauling about the dearth of rum and jamming the Ouzo into a special pant leg compartment sewn into his pants–and nobody cares.

When Scott Adams wrote The Dilbert Principle, where one of the underlying subtexts was that those at the administrative levels will sit in a room—on a committee—and formulate the WORST POSSIBLE solution to a problem, he was tapping into a veritable mother lode of correctness. This has to be the case. There simply is no other possible explanation for the following continuum, short of a cerebral blood-clot:

PROBLEM: Loss prevention consists of alcohol theft, and most altercations with perpetrators involve physical resistance over the theft of alcohol

SOLUTION: Put alcohol in an isolated, unobservable place, to which disheveled individuals gravitate towards “for no apparent reason.”

SECONDARY SOLUTION: Lock up the Gillette, Mach 3’s, in case anyone wanting to ameliorate a 5 O’clock shadow is casing the joint.

Clearly, these people have not sat in the white-hot revelatory presence of the Lean 6 Sigma red-belts. So until then, I’m going in there and re-writing that policy manual.

Plus, I’m out of razors.