File this in the Men Are From Mars, Women Are From Venus column.  There’s no way around it:  men and women are on completely different frequencies, when asked to perform the calculus of everyday decision-making conundrums.

So I’m sitting in the living room the other day, working on the prototype video in Adobe After Effects.  My wife, who had just gone on a major purging mission in the garage, walks through to get something to drink. And, as she always does, she offers me something too.

To which I, still fixated on setting a key frame on my complex graphics program, answered,

“I don’t care. Anything is fine, thank you.”

Let me just tell you now, men. This is not sufficient.  This is—from what I now understand—a provocation; the rhetorical equivalent to wearing a red jump-suit in Pampalona, Spain, when it’s time for the “let’s get ourselves gored by a raging bull” festival.

“You’re doing it to me again, “she says.

“Making me choose, when I gave you a choice.”

Let’s look at this supposed “choice” in algebraic terms: 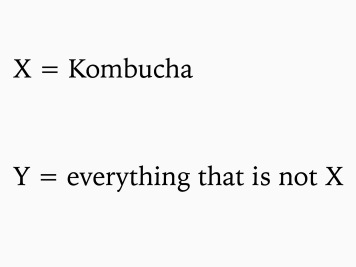 See, in order for there to be a choice, the “Y” variable must have an assigned value, or at least one that can be determined with the factors I am given.  And technically it does, but the “Y” variable has been assigned the dubious value of “not being X,” so I am now forced to either:

Break my concentration, and run through my entire life’s chronological rolodex of possible beverages and name one. Or, run through this list of immediate options:

·         Try to be diplomatically convenient by saying “anything is fine.”

Now, that last one will also land me in the same trouble, because she will immediately say “You don’t like Kombucha? What else would you like, then?” forcing me to the side of the cognitive road I was trying to not to exit.

This scenario is one that is not new, just new in the “X or Y” sense.  I’ve been given this one too:

“I’m hungry, and feel like eating out tonight.  How about you?” She says.

Again. Diplomacy and the implied contentedness with anything gets me nowhere.  I am a bad, bad man for this answer, despite the fact that the inaugural on ramp to this conversation starts with:

I’m of the opinion that this is not a fixable sector on the matrimonial hard drive.  I’m thinking this is somehow a hard-written bit of code in the Windows, Vista, Wife Edition.

And, as with all computer options that have no effective work around around, update or technological patch, you do what any good tech would do.

Pick the Kombucha and shut up.

18 Responses to Just pick the Kombucha.