Canonize Chesterton? Only if I can be there! 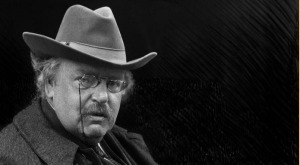 The other day, I read this fantastic rundown of Gilbert Keith Chesterton’s writing. I was reminded yet again why I love him so much–if Mark Twain and CS Lewis fell simultaneously into a hay-bailer, you’d get GK in a tight bundle.

Of course the article is also arguing for Chesterton’s elevation to sainthood–being that I’m not a catholic, I can’t really put my eggs in that theological basket, but I’d certainly like to be around the conclave that gets to weigh that one out–because the man’s writing was fantastic–and funny–and cheeky–and well, magic.

And these guys would have to read it all aloud to make their cases–and counter-claims.

Every time I watch some tortured, injured-on-the-front-lines-of-micro-aggressions friend of mine start moralizing with what Francis Schaefer called “feet firmly planted in mid-air,” I think of my favorite of his books: Orthodoxy.

In an essay called The Suicide of Thought, Chesterton said that the new, modern rebel/skeptic/polemic was constantly “undermining his own mines,” since, he has no cohesive worldview, he will inevitably start denouncing the doctrines he previously employed to denounce other ones:

The man of this school goes first to a political meeting, where he complains that savages are treated as if they were beasts; then he takes his hat and umbrella and goes on to a scientific meeting, where he proves that they practically are beasts. In short, the modern revolutionist, being an infinite sceptic, is always engaged in undermining his own mines. In his book on politics he attacks men for trampling on morality; in his book on ethics he attacks morality for trampling on men. Therefore the modern man in revolt has become practically useless for all purposes of revolt. By rebelling against everything he has lost his right to rebel against anything.

I distinctly remember sitting in the inaugural gathering of my History of Western Civilization class many years ago. Seated right in front of me was someone who—based upon the way they had turned their entire body into a socio-political billboard—I could safely assume to be an “anarchist.”  But, taking the pseudo-postmodern-politically-correct route of NOT ASSUMING that a man with a giant, circumscribed “A” on his chest to BE an anarchist, I asked him if he was.

And indeed, he stated to me he was all those things.  While I’m no expert in anarchism (and a quick look at any on-line, definitional take on the matter will show you that—even they have managed to balkanize themselves into denominational factions) I did manage to ask him if “keeping a rigid class schedule, replete with the ridiculous academic expectations of this class” was in any way “conflicting.”

It was not appreciated.  In fact, I doubt he’d appreciate the idea that a philosophical position that CAN schism isn’t really one that is as anarchist as they’d like to be.  How pathetic it must be, to see the resident nihilist charging across the academic quad because they’re late for horticulture classes.

Meanwhile, Richard Dawkins, the esteemed Dean of the “neo-atheists,” and author of the mind-blowingly successful book, The God Delusion, posits something quite similar in another tome, The River out of Eden:

In a universe of blind physical forces and genetic replication, some people are going to get hurt, and other people are going to get lucky; and you won’t find any rhyme or reason to it, nor any justice. The universe we observe has precisely the properties we should expect if there is at the bottom, no design, no purpose, no evil and no good. Nothing but blind pitiless indifference. DNA neither knows nor cares. DNA just is, and we dance to its music.

Steal Richard’s car, however, and he will have anything but blind, pitiless indifference towards said dancer.

The minute we try to devalue one of life’s supposed variables is the very minute you argue for a value by which to measure its worthlessness. Currency indexed to sawdust is only worthless because currency exists.

In short, you simply cannot get away from objective truths. I don’t begrudge Richard’s attempts to galvanize his incoherence into some useable worldview, but c’mon. One minute he’s arguing for life’s completely meaningless trajectory—and the next—he’s comparing religious indoctrination to  . . . child abuse?

Okay.  I get it.  Children are valuable.  Precious.  Worthy of a hedge of protection . . .

12 Responses to Canonize Chesterton? Only if I can be there!