Yesterday, I hopped in the car, and took my daughter through the lanes of my childhood nostalgia.  Every now and then, I simply get a wild hair, and decide I want to see exactly how much of the past echoes with any warmth through my continually-aging mind.

The picture below, however is a cheap, lazy and dimensionally dubious diagram of some hi-jinx I was up to at precisely twenty-three years of age.  I know this, because it was Easter Sunday of 1990.

And Easter Sunday of 1990, I was wearing an ape suit, and running through the headlight beams of cars flying down this road.  That’s right, instead of celebrating the miraculous and universe-shaking cataclysm of the Resurrection, I was fomenting a second-string Bigfoot hoax in Happy Valley.

In short, I waited until nightfall, and would lay against the wall marked “X” and wait until I had at least 100 good feet of halogen twilight burning down the lane.  Then, I’d do my best knuckle-dragging trek across the road to “Y”, and then roll down the cleft.  My buddies, John and Dan were hiding in that cleft, trying not to wet their pants.

I was also trying not to get shot.  Guns are legal.  And plentious.  Do the math, people. 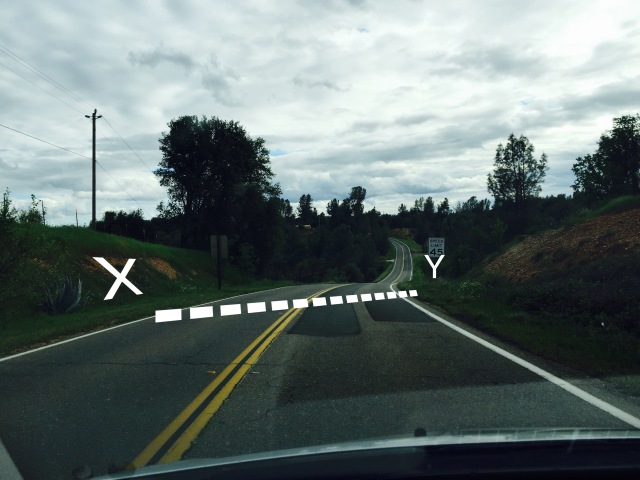 I’m not sure what makes Sasquatch a continual fascination for me–not in the sense that I believe in him, but how much fun the idea of him existing is.  And especially how much fun it is to invoke that in others.

See, to me, a bona-fide Sasquatch hoax is the TRUE–victimless crime.  That was twenty-five years ago. I can STILL–hear the brakes squealing and people engaging in breathless, mid-road speculation while I tried not to evacuate my bladder in a borrowed simian skirt.

Funny thing is, I’m getting that itch again.  Something feels incomplete. Like an unfinished adagio by a great composer.

Note:  I also realize that, for those of you that follow this blog with any degree of regularity, that I have made possibly the most bi-polar swing from introspecting the frayed margins of my faith, to protracting some deliberate and pre-meditated cognitive dissonance on my fellow man.  I don’t get it either.

2 Responses to Driving towards Bigfoot